Traditional tires pose a number of serious environmental concerns that aren't always mitigated by proper disposal. In the United States alone, more than 170 million tires are manufactured, each one requiring 7 gallons of oil to produce. That's almost 2 billion gallons of oil needed every year, the same amount required to drive a 25 MPG car to the planet Mercury.

When it comes time to dispose of those tires, even more risk factors for the environment have to be taken into consideration. Tires make up about 2% of the total municipal waste for the average landfill. There are only 11 states that have banned tire waste and only about 35% of tires are recycled properly.

Even though the EPA does not classify tires as a hazardous waste, toxic chemicals can be released and found in ground water as tires in landfills begin to break down. Tires contain oils and chemicals that can contaminate the soil. They also leech heavy metals like lead.

So as far as the environment is concerned, tires are a huge bummer. But what can be done? Is there a better alternative? 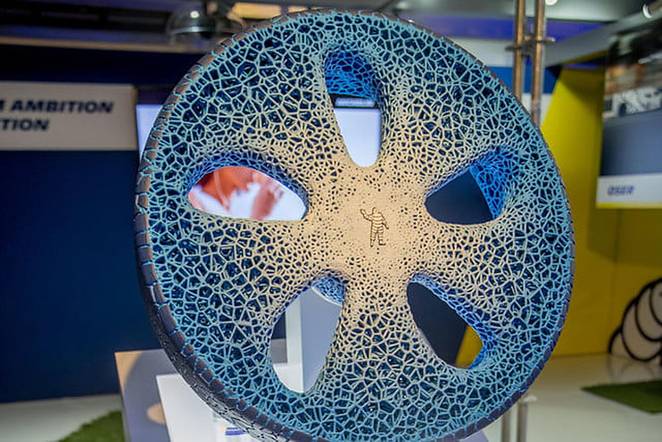 Michelin, a French tire manufacturer, recently debuted its new Vision tire, which has an interesting blue hue and a spongy appearance. The web-like structure of the tire means that the tire never goes flat and doesn't ever have to be filled with air.

The tire can be 3D printed out of a variety of materials like organic or recyclable rubber compounds. Orange zest, paper, and hay can all be used to print these tires, which would also make them recyclable. Metal can also be used. This means that no petroleum or synthetic elastomers are required in order to make this ultra-durable, long-lasting tire.

If the tread of the tire starts to wear down, it can simply have a new layer of tread printed on top of the existing tire. The company says it's like recharging a tire the same way you would any electronic device. The tires can also be specially equipped for wintery and rough terrain. 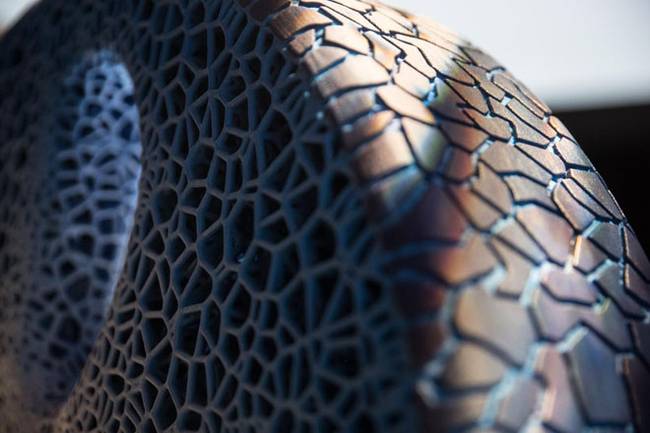 The tires can also be equipped with sensors, making it the world's first 'smart' tire. It can provide the driver with real time data about its overall conditions and when a new layer of tread may need to be printed.

Michelin envisions a future where new tread may be easily printed at just about any gas station. And given the enormous footprint of the standard tire used today, it seems like a pretty awesome option. Take a look at how the new smart tire would work:

The post Meet The 3D Printed Tire That Doesn't Ever Go Flat Or Wear Out appeared first on tentree.