Thanks for reading Part 1, here is the rest of the trip and the link to the map visual is below. 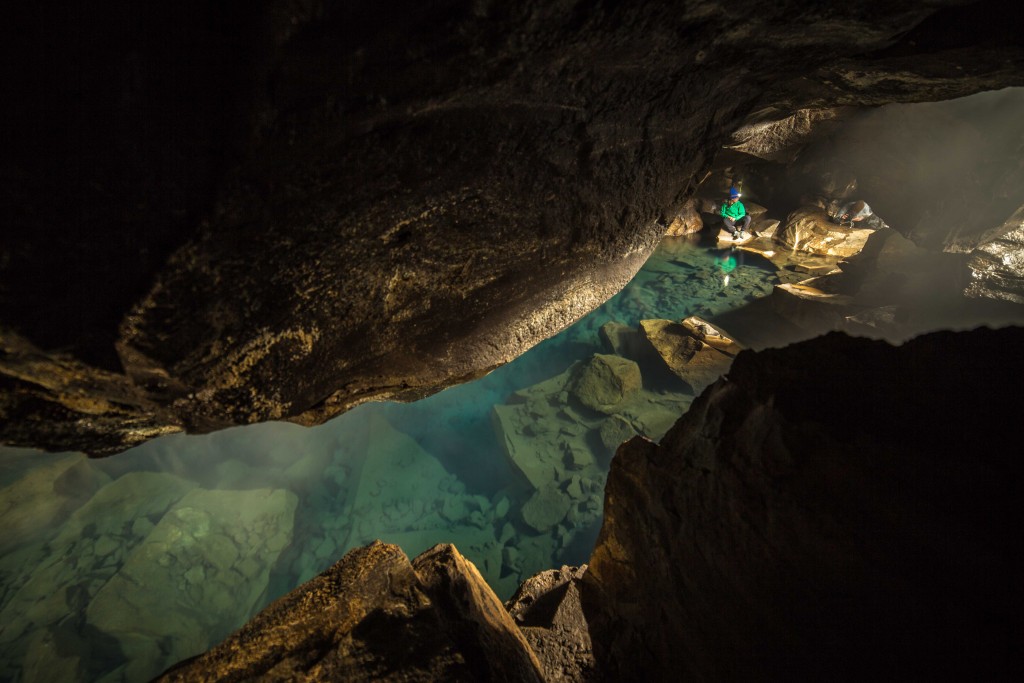 Next is Lake Myvatn, this biological area is extremely rich in nutrients and biodiversity. Formed by you guessed it; volcanic eruptions that occurred thousands of years ago! They formed this lake which is surrounded by these unique lava formations including Grjótagjá. The geothermal spring with water so clear and blue you cannot gauge the depth to the volcanic rocks below. It is about 46 degrees and not to be swam in. Time to spend here about 30 minutes to 1 hour. 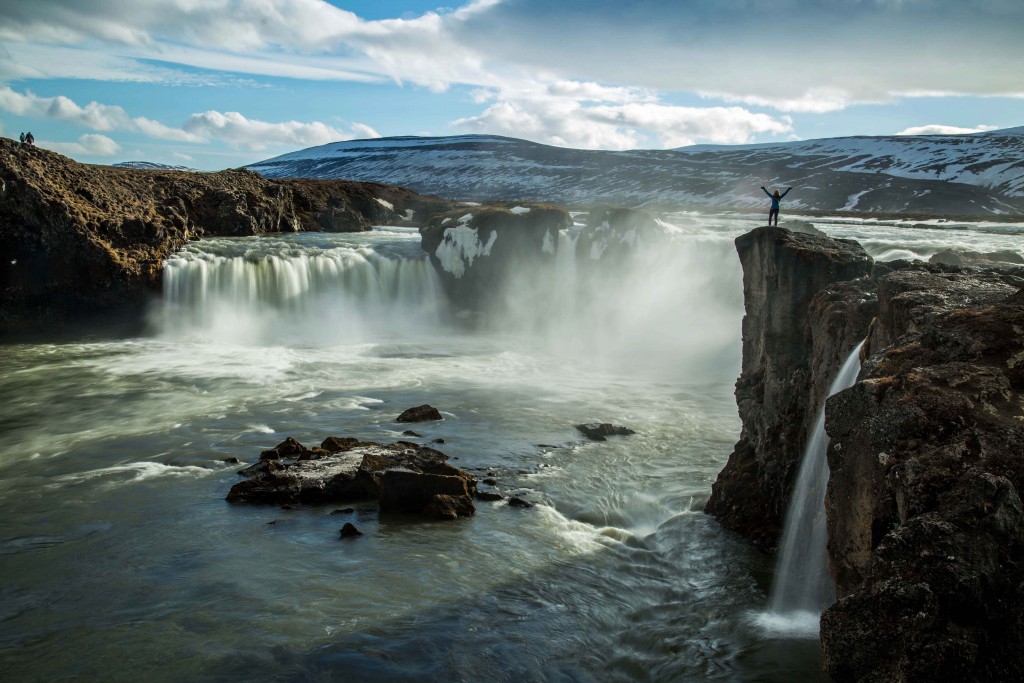 This site is one of my favourites by far. Explore both sides of the falls and take time to just watch the sunset behind the mountains and falls. This is a semi-circle of greatness. Spend 1-3 hours here.

Akureyri is known as the capital of the north. The second largest population of around 18,000 inhabitants this university town and great for going for a swim in the local pool, getting a bite to eat, and enjoying the surrounding views. Spend 0.5 day and 1 night. 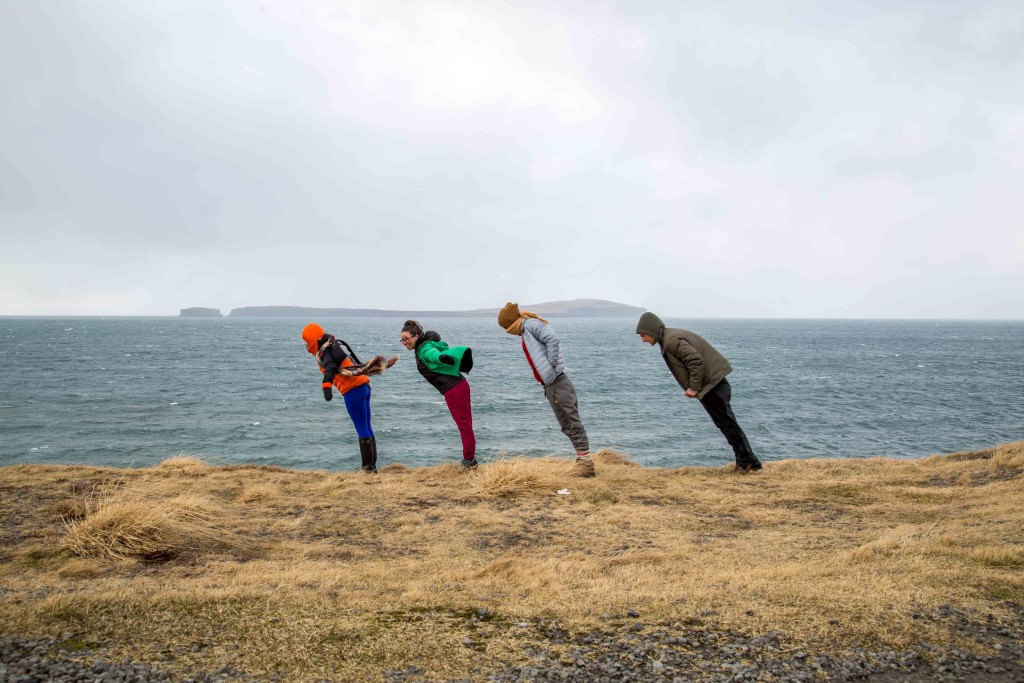 Next we headed north, we took the road 82 and the 76 around the northern peninsula to see some of the small fishing villages through Dalvik, next to Ólafsfjörður, then to Siglufjörður, then to Hofsos and stayed overnight at Sauðárkrókur. This was a unique part of our trip around Iceland as we experienced these intimate fishing villages first hand as well as some of the most powerful winds I’ve ever witnessed. Just survive the winds while driving. 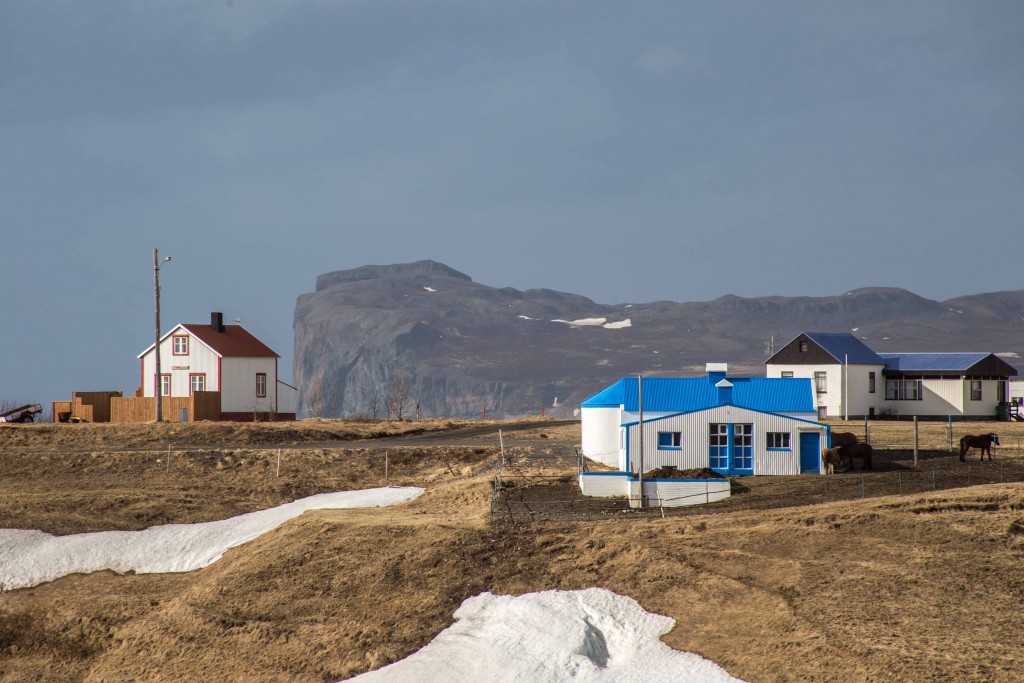 Our goal was to head to the Western peninsula. So we headed past Blönduós then off of Highway 1 to the 68 to Borðeyri as highway 1 was closed with snow coverage. Then to the gravel road of death which was road 59. It just so happened as I’m navigating through thousands of pot holes, high snow drifts, and high winds everyone was sleeping. But I’ll tell you I’m still impressed I didn’t flip the van or get us stuck. Next to road 60 then to road 54 which was getting us into…. Snaefellsjoekull National Park!

But first we checked out Stykkishólmur there is a gorgeous lighthouse and viewpoint here well worth taking a quick detour. 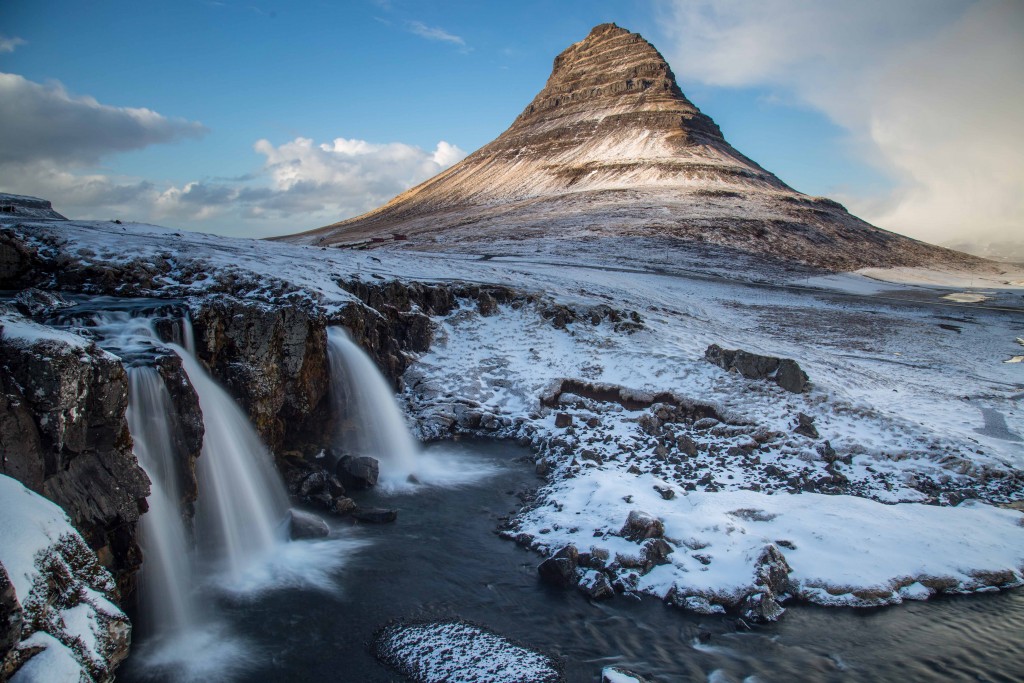 Then we saw it the cone shaped mountain at last! Kirkjufell and Kirkjufellfoss. This site is best witnessed across the waterfall looking back. It’s a very weird realization of the layout of the land once you’re there. Be safe! I grabbed onto the rock wall heading down to the bottom of the falls to have an embedded boulder come out and push me over the ledge down the hill and the boulder missed my head by 3 feet and my hand by 1 foot. My tripod was absolutely destroyed. Just a safety tip! Spend a lot of time here 1 day and 1 night. Cool night shots without a doubt.

Next was Ólafsvík and this was a cool town to drive through as it had a whale graveyard so take 15 minutes and check it out!

Another favourite here and a surprise located on the right hand side at the beach is Djúpalónssandur. This looks like the devil’s castle. Take photos from afar and go for a walk down and around it! Spend about 1 hour to 3 hours.

Vatnshellir caves also near there, but we never went. They look like they’re worth going on a tour for. 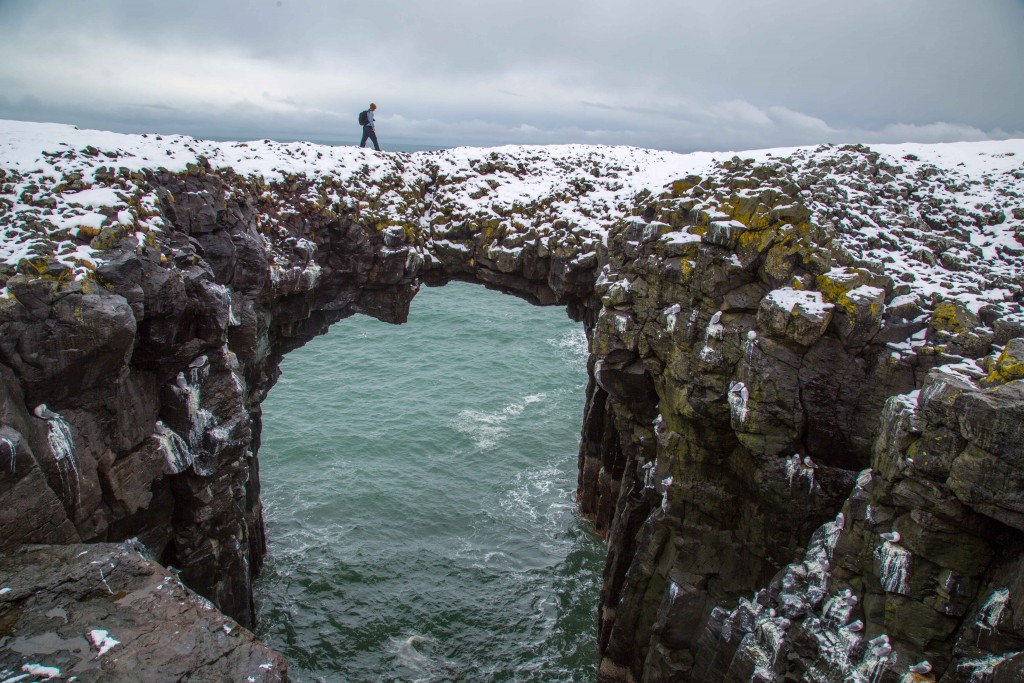 Arnarstapi to Hellnar hike. This is a gem. It’s a walk with enough views to trick you into thinking you just hiked all day to see these incredible volcano formations. The arches are abundant here! Spend 2 to 4 hours here.

The next leg of the trip was to Borgarnes. On the way from Arnarstapi to Borgarnes there are plenty of picturesque sites of lakes, mountains and their reflections, but be wary this Western Peninsula in the winter can have incredibly dangerous roads layered with ice and storms that blow in so fast you’ll be stranded without question. So pay attention to the weather and forecasts. 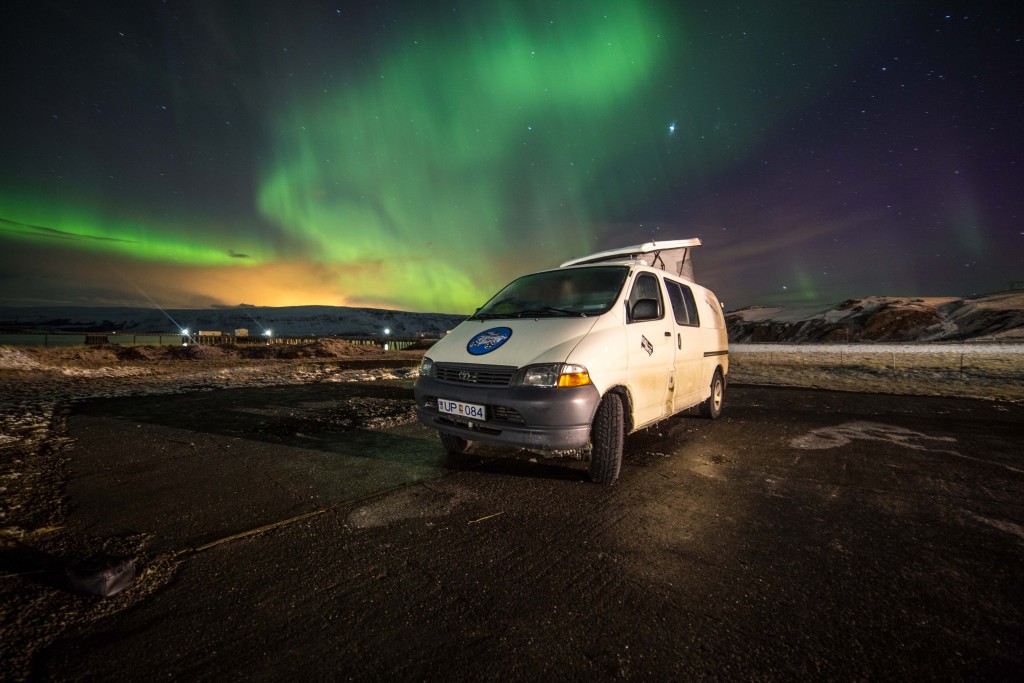 Next take the 47 around the inlet called Hvalfjarðarvegur. For some reason this was our goodluck spot for Northern Lights. Keep your eyes peeled once that sun drops. For us, end of March and beginning of April we could see the Northern Lights/ Aurora Borealis come out at 10pm then go strong until the sun came up. Clear skies and low moon light is key, but not absolutely necessary.

Thingvellir the continental divide of the North American and Eurasian plates. This site is significant not only for geographical reasons, but for political and cultural significance. Silfra is the place to go to scuba between the plates. We didn’t do it but next time around! Spend 1 to 2 hours here. If snorkeling or scuba I’m not sure but would like to know how it goes! 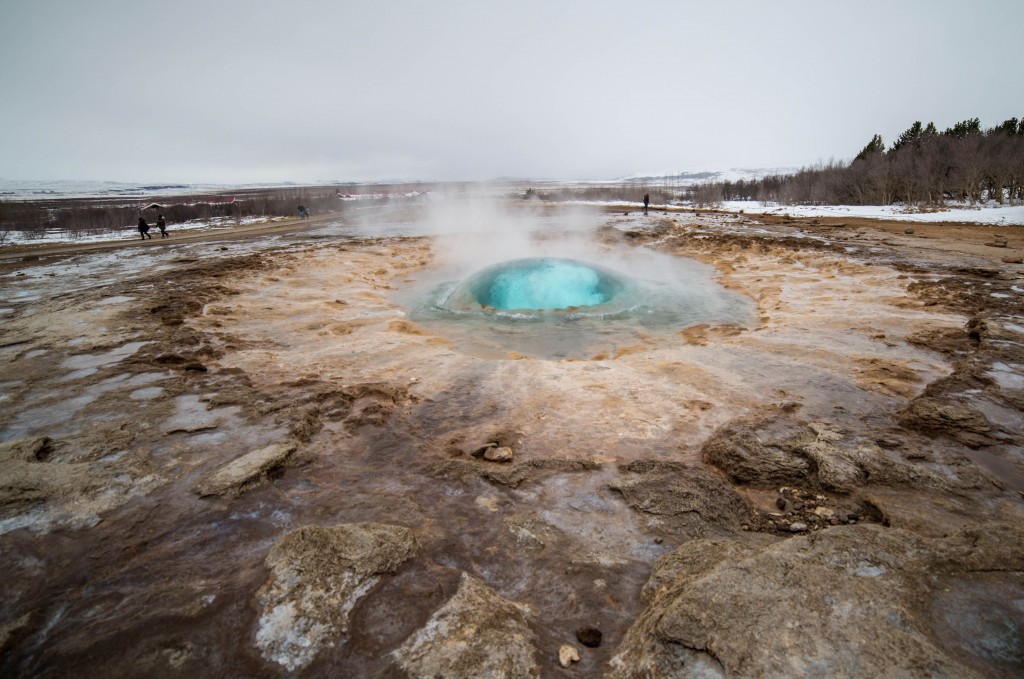 Then down the road 365 to the road 37 to Geysir. I was impressed with the Geysir it goes off approximately every 14 minutes (sometimes quicker or slower but averaging 14) I believe and you can definitely have a front row seat to the explosion! Spend 15 minutes to 30 minutes here.

After we drove 10 minutes down the road to Gullfoss. While it looked incredible in photos; we couldn’t see a thing or even 5 feet in front of our van due to an incredible snow storm that came in during the 10 minute drive from Geysir. Just goes to show that weather in winter is something else! Spend 30 minutes to 1 hour here.

35) Then back to Reykjavik! 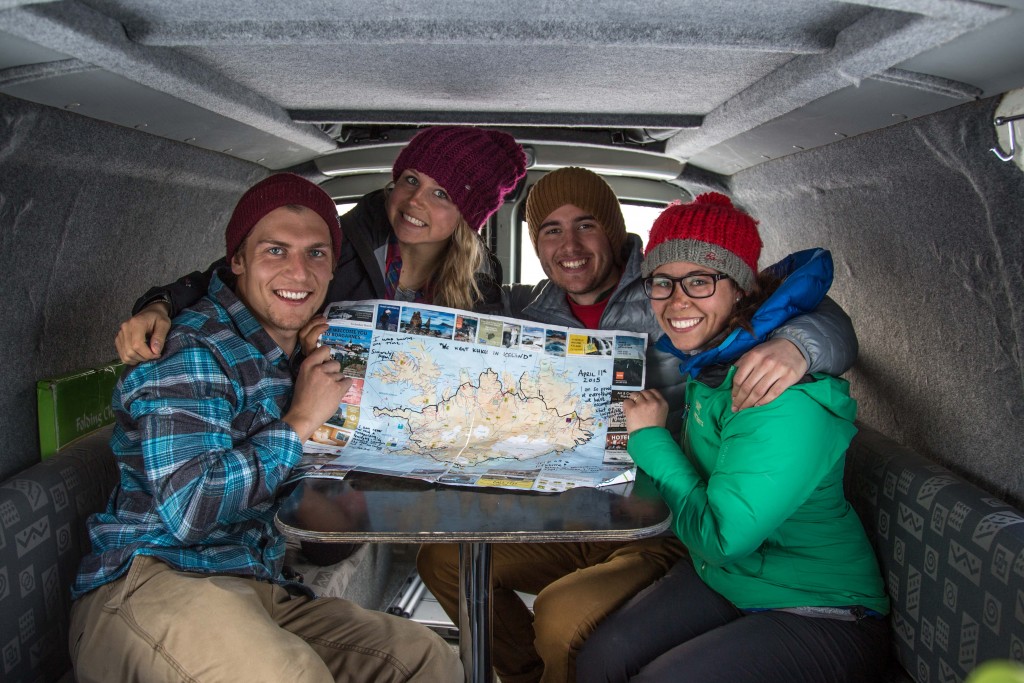 Here is a map of our trip and the approximate timing for the days and nights and where we camped. It was a once and a lifetime experience at a place that really highlighted my need for more adjectives and a new vocabulary. Please use common sense in respect to yourselves and nature, in Iceland you’re on your own. For more tips, videos (coming soon), and equipment ideas visit www.chaseteron.com or email me at chaseteron@gmail.com