Lots of people love to go to Farmer's Markets - me included. That's not at all surprising considering the fact that there is nothing like the taste of freshly picked, locally grown produce! But, in many parts of the world, fresh fruits and vegetables are really hard to come by in the Winter months.

This is definitely the case in the Midwestern United States. When I lived in Illinois, I would never buy fresh tomatoes in the winter. They taste like cardboard to me. Blech! So, unless you have a greenhouse, fresh, local fruits and veggies are impossible to find. But, greenhouses are really expensive to keep warm in the winter when the wind-chill can get down to a nose-numbing minus 30 degrees (F)!

Well, Russ Finch has come to the rescue! Russ, a former mailman from Nebraska, came up with this plan to build a geothermal greenhouse that costs just $1.00 per day to heat. He calls it The Greenhouse in the Snow and it is amazing!

In an interview with NPR, Russ stated, "There have been hardly any successful 12-month greenhouses on the northern High Plains because of the weather. The cost of energy is too high for it. But by tapping into the Earth's heat, we've been able to drastically reduce the cost."

Russ' greenhouse is based on a walipini design. The floor of the greenhouse sits 4 feet below ground level and the roof slants to the South, which enables it to best take advantage of the sun's rays and heat. During the day, the temperature inside the greenhouse can rise as high as 80 degrees (F). It's at night, when temperatures drastically drop, when the geothermal aspect of the greenhouse kicks in.

"All we try to do is keep it above 28F degrees in the winter," Russ says. "We have no backup system for heat. The only heat source is the Earth's heat, at 52F degrees at 8-foot deep." 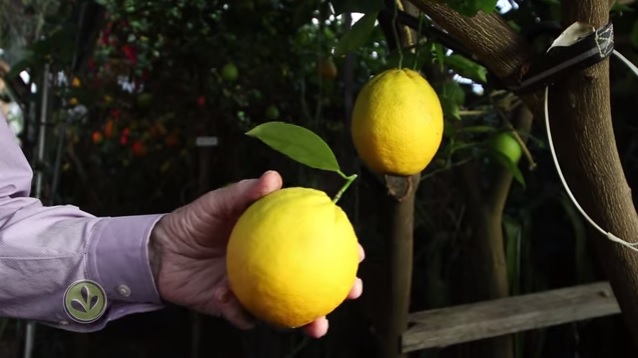 And, this is good enough for most citrus, figs and grapes, as well as, cold-hardy vegetables. Heat-loving plants like corn and tomatoes are more difficult to grow. But, as Russ puts it, "Any type of plant we saw, we would put it in and see what it could do. We didn't baby anything. We just put it in and if it died, it died. But most everything really grows well. We can grow practically any tropical plant."

With his geothermal greenhouse, Russ can grow a couple hundred pounds of fruit each year, that he then sells at local farmers markets. It gives him a nice winter income; however, his main money-maker is selling the design for the Greenhouse in the Snow. So far, he has sold 17 of his designs in the United States and Canada. The plans cost $49.00.

The Greenhouse in the Snow is a little pricey to build, at around $22,000.00, but they are quite amazing and the bounty of fresh fruits and veggies that everyone craves, especially in the winter, is priceless. To date, 17 of his designs have been built in the U.S. and Canada – we hope to see many more.

Watch the video below to see this amazing greenhouse and hear Mr. Finch talk about it.